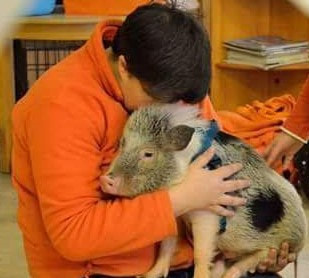 Meta Štravs, nurse and student of special education and rehabilitation. "From a young age I’ve been interested in nature and exploring the world around me. Right now I spend the days with my three children (Tinkara, 9, Jure, 6, and Jakob, 2), my partner, my pets, meetings with ambassadors nasmeha, researching animal assisted therapy, and educating myself about animals and alternative approaches to them. I’ve been carrying out animal assisted therapy and active help for seven years. At present, I’m working with a dog named Zora, two cats named Čarli and Snow, a pig named Albert, rabbits named Snežka, Pika, Lola and Daisy, two guinea pigs named Pikica and Bučka, a bearded dragon named Trn, an African white-bellied hedgehog named Gregory, two snails from the Achatinidae family named Tine and Bine, a chinchilla named Čili, two geese named Vili and Gaga, and Japanese silkie chickens named Jaka, Pepca, Fani and Reza. During the work I get in touch with many different people, from preschool children to the elderly. When working, I try my best to listen to my animal coworkers and work for their good. Beside the animals I work with, I also share my home with four dogs named Lev, Snoopy, Marley and Mausi, two cats named Mimi and Lili, two goldfish, walking sticks, and with five Achatinidae snails. Our daily life is intertwined with animals and exploring nature. I also learn a lot from my children whose point of view helps me maintain my childlike curiosity and desire to seek out new knowledge."